Over the years, I’ve hiked bigger mountains in Yosemite. I’ve done longer hikes, including a 24.3 mile trek of the Devil’s Path in the Catskills (which my brother and I insanely did in 25 hours of pretty much straight hiking). I’ve even hiked bigger mountains in New Hampshire, like Mount Washington which I’ve been up several different ways multiple times. I’ve even hiked in blistering 105 degree heat in Texas. But hiking a few weeks back up Mount Willey in the White Mountains of NH was definitely the most challenging hike I’ve done.

I’m not in the best shape lately, but I’m a work in progress, so when my aunt encouraged me to go hiking with her while I was up in Maine visiting for a weekend, I told her it needed to be a fun hike with a good view and something special for the teenagers I’d have with me. I had seen pics of hers and my mothers with gray jay birds eating trail mix out of their hands and declared that the hike I wanted to do. At around 5 miles long, everyone assured me that if I could get over the tricky ladder section, this hike was a snap.

Everyone is a liar.

This may be a snap for people who hike the White Mountains all the time, or people in excellent shape, but not for the rest of us mortals.

This hike of the 4,285 foot peak started out OK. I was moving slow, slower than my dad (who is an avid hiker) and my daughter and her friend. But I felt just fine. My aunt (a weekend warrior who is on a mission to do all the 4,000 footers in NH) and her friend had done a sunrise hike on a nearby mountain and were going to catch up to us. I kept plodding away, walking slow and steady so I didn’t get injured.

And we got to the ladders. Which were… interesting. They are these big wooden round planks that look like Lincoln Logs, and you climb them. Not a big deal, but when you get to the top of one, you have to shimmy over to the next one a few feet (because they are off center), and there is NOTHING to hold on to. You are just hanging out on a little 2×4 plank, hoping you don’t make a misstep.

It took me a while, and my dad (who had done this hike before said it was not far from there to the top), so he and the girls took off ahead, while I plodded on the uneven, rocky terrain. Because they had taken breaks a lot while waiting for me to catch up to them, they would take off when they saw me. Not wanting to slow the group down, I felt like I couldn’t rest, which was a mistake for me.

I ended up with a massive migraine. I was so dizzy and had little spots in front my eyes and my head was just pounding. But I could take a step up a boulder, pause a second, gain my equilibrium and then keep walking. It was a slower process than I wanted, but it was doable. I knew once I got to the top I’d have a rest, and most importantly get to see the view and feed the birds.

I do remember cursing a few times seeing rocky structures like this one pictured above and wondering how to get over them with my swirling headache, but I used a full body hiking move, where I’d lean and use my hands and knees. Looks ridiculous, but it works!

Then we got to the top. The mountain was in a complete cloud and this was the view.

Then we waited for a while for the birds to come out. My dad had a friend who was there two days prior and saw the birds. But they did NOT want to come out for us. I felt like crap, I had pushed to the top of the mountain (which didn’t even have a good view or the promised birds) and I felt like I had no idea how I was going to make it down. It had taken almost twice as long as we’d planned to get up to the top, and I was already wiped.

Oh, and my aunt never caught up with us because she had her own issues on the other mountain.

I started back down. Every step was really hard. My legs were holding up OK, but my head was not. And trying to find balance going down hill on rocks that were kind of wet, with a migraine is not something I particularly recommend to anyone. It was taking forever and I was starting to worry we wouldn’t make it down before dark, even though it was only 3 PM. It was supposed to be a simple 5 mile hike so I didn’t have my full overnight gear on me.

But I followed my mantra that got me through marathons – just keep swimming. I know it is just a silly Finding Nemo quote, but it really keeps me moving. Just. Keep. Swimming. I would huff out as I’d walk. I got to the ladder section and decided that with the constant dizziness my best bet was to “butt slide” down, like a little kid. It worked, and Catie (my daughter’s friend) shouted up that was how she’d gone down too. I could see everyone else looking exhausted due to the sheer amount of hours we’d been hiking because of my slowness, but no one really complained, except for my own daughter who was mad it took me a long time to get to the top because I had the snacks and bird food.

We made it down, eventually, and safely. But I felt … not accomplished. Instead I felt defeated. I had picked this hike for the birds and they weren’t there. I held everyone up and we took twice as long as we planned. I dragged two teenagers out and slowed them down. My father could have done that hike twice in the time that it took me to do it once. It was still a long drive back to my parents. The kids definitely would have preferred the mountain coasters and the park next door next to this exhausting day adventure.

They were all supportive, and had offered kind words during and after, but I just felt like a massive letdown. I know it wasn’t really my fault I got a headache and didn’t think to pack my fancy migraine meds. I know I should have taken more breaks and worried less about the few extra minutes of hiking time. But I didn’t. I spent several days after beating myself up about everything I did wrong.

But then, I recent realized, I still climbed a 4,200 foot mountain. I spent the day in nature. And, most importantly, I did it, despite the massive hurdles I faced. I’m a fat person, way bigger than anyone else I saw on the trail (male or female). I only cried once (when I heard my daughter say “is she ever getting here.”). I pulled myself over rocks and through mud and over some obstacles that weren’t great for me since I like feeling a bit more stable when off the ground. And I never stopped moving, even when I felt like quitting. So while this hike was hard, and at times quite miserable, looking back, I think it was a pretty great achievement in my book. 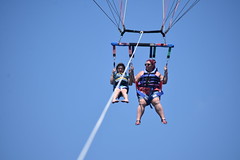 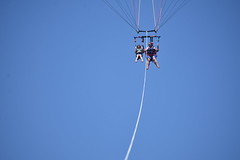 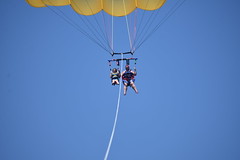 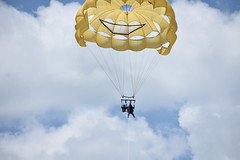